Green city: Southampton and its trees

One of the first observations that most people make when visiting Southampton is that it is a very green city. This impression is helped by the fact that Southampton has limited high rise development, but a Google Earth view of the city shows an awful lot of green mainly because of a large number of mature trees and parks.

Southampton’s greenness, and its abundance of trees has been commented upon for centuries. Many of the city’s districts have names that bear testament to this: Lordswood, Pear Tree, Bitterne Park, Bassett Green, Highfield and so on. The districts of Thornhill and Maybush are both named after the hawthorn tree – thorne being the old name for the tree, and may was the term for hawthorn blossom. The logos for both Southampton City Council and Southampton Football Club both feature trees.

Visitors entering Southampton from the north, drive down an impressive tree-lined road called The Avenue. In the 18th century this route was lined with elm trees and was designed as an attractive green corridor to impress people arriving from the direction of London. It is still a striking 1.5 mile feature, but the elm trees were later replaced by other trees such as oaks.

The Avenue runs through the city’s biggest green space – Southampton Common, which covers around 330 acres. It houses an abundance of mature trees, including many oaks. In the First World War, the Common was used as a billet by the army. Soldiers were stationed there in tents, often waiting for a transport to the Continent by ship. The story goes that each senior officer’s tent was marked by a Corsican pine growing outside in a tub. When the army eventually vacated the site, these ‘officer’ trees were hastily planted in a line to save wasting them. Those trees are still standing and are now very tall, although only eight survive.

You can sometimes trace other aspects of a city’s history by looking at trees and their distribution. For example, there are a large number of mature magnolia trees in the district of Shirley, often dating back to the mid-20th century onwards when urban domestic gardening for purposes other than food production was becoming more popular, and colourful foreign plants began to become more affordable.

Magnolia tree in flower in Shirley

Meanwhile to the east of the city there were once country estates with large houses where landowners planted exotic specimen trees. Although the large houses have long gone, the trees often remain: in the Midanbury and West End areas, for example, are a surprising number of giant sequoias or wellingtonias. These massive trees are native to the Sierra Nevada of California and were introduced to the UK in mid-Victorian times. They look quite incongruous in England, standing head and shoulders above the native trees around them. One of them grows straight out of the middle of a pavement that has had to be enlarged to accommodate it.

West End is home to a number of other interesting trees that were originally estate trees. The UK’s largest sweetgum tree stands here at Hatch Grange. It’s a beautiful tree in the autumn when the leaves turn red and gold. But perhaps the most famous tree in the area is ‘old spikey’ the very lofty monkey puzzle tree at the Ageas Bowl cricket ground, which is sometimes seen in TV footage of the ground on match days. 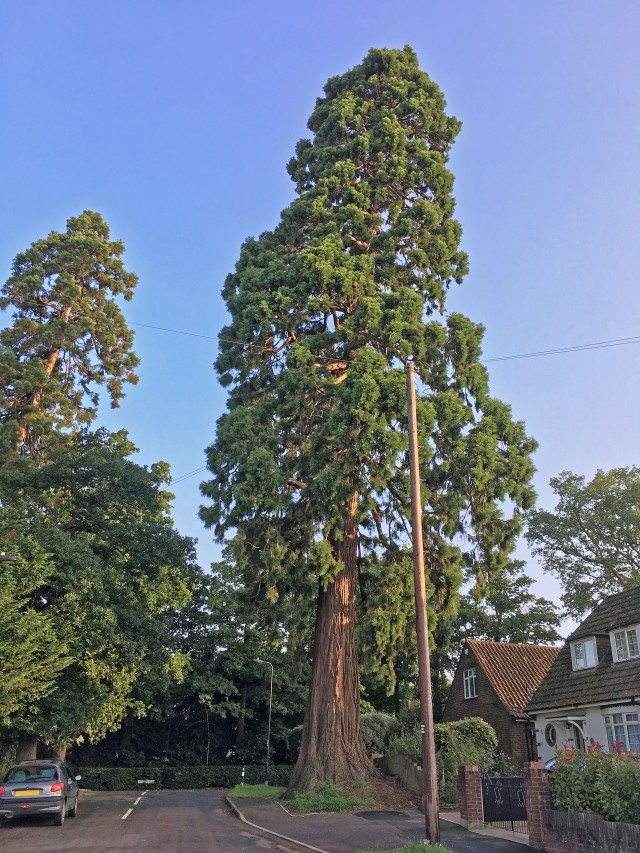 2 Responses to Green city: Southampton and its trees