What you see is what you get

This is part 3 in my series about how birds got their names.

Birds have long been named after their behaviour. Names such as the woodpecker, turnstone, flycatcher and wagtail describe exactly what our ancestors saw them doing. A few of these names are very ancient – sparrowhawk and fieldfare have hardly changed since Anglo-Saxon times – but most other names of this kind seem to have arisen in the 15th to 17th centuries. By the time of the Tudors, for example, our ancestors were writing about the Kynges fisher, so-called because it was ‘the chief amongst the fishermen’. However, before then the kingfisher was more widely known as the halcyon, after a beautiful woman in Greek mythology called Alcyone who drowned and was turned by the gods into a bird.

Many birds have been christened on the basis of the noises they make, and often these names are ‘echoic’ – they sound like the bird’s call. Well-known examples of this include the cuckoo and the tirelessly persistent chiffchaff, but birds such as the curlew, pipit, and rook have distinctive calls and their names probably have a similar origin. The stonechat acquired its name because its brisk call sounds like two stones being clicked together. This impersonation has inspired various delightful names given to the bird down the centuries – such as chickstone, stone-clink and stone chatterer – until ‘stonechat’ became the most widely-accepted version. The jarring unmusical sound of another bird is reflected in its name too: the nightjar. A large group of birds that seemed to sing all the time began to be called warblers in the 18th century.

The common names for many everyday birds are one-word portrayals of the bird’s appearance: our ancestors often labelled a species according to what they saw. Some of these names are very obvious (or unimaginative) such as the blackbird. The duck with a long narrow tail became known as the pintail, the tiny bird with a bright orange-yellow crown was the goldcrest. Other names of this kind may take a little more interpretation. An old term for the leg was ‘shank’, and so two of Europe’s most frequently observed wading birds with distinctively coloured legs are the redshank and the greenshank. The word dunnock has probably a mixed Celtic and Anglo-Saxon origin and means ‘little brown one’. The coastal bird the shag is probably named on account of its shaggy crest, whilst the ‘hammer’ in the bird name yellowhammer is taken from an Old English word for feathers or covering. 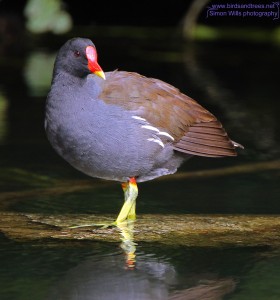 Birds were also named because of their habitat. The plump bird that picked it’s careful way, chicken-like, across damp ground was called the moorhen. The bird with the beautiful song that was always seen soaring high in the heavens was the skylark. The small bird that was once numerous on the margins of agricultural land was the corn bunting whilst a cousin that was more commonly observed in reed-beds was the reed bunting.

In more modern times, some well-known birds have names hinting at their geographical connections such as the Canada goose or Arctic tern, but also the popular cage bird the canary whose name originates from its home on the Canary Islands. Perhaps most surprisingly the pheasant has a geographical origin to its name. It is called after the river Phasis in the kingdom of Colchis (modern Georgia), where the ancient Greeks first encountered it.

If you missed my two earlier posts about bird names, then follow these links:

Names of our birds (part 1) – languages from which English bird names originated.

Birds we named after ourselves (part 2) – birds with human-derived names.

2 Responses to What you see is what you get